New Year’s eve is the greatest party day of the year. Celebrate all the good and ditch all the bad by ringing in the New Year with the hottest parties. Vegas knows how to throw the best parties and we’ve got some amazing options this year with spectacular musical guests and celebrities to help you start 2015 with a bang!

Or check out the Level 107 Party and dance all night long with DJ Dezie.

Three-hour premium bar, champagne toast, and access to three rooms of party: the Main Room, The Deck (featuring hits of the decades), and The Rooftop. This is a prime location for experiencing multiple dance parties in one place and for premium firework viewing at midnight against the backdrop of the Eiffel Tower.

Open bar special from 10:30pm to 12:30am and featuring a performance by singer/songwriter Bebe Rexha, this modern and luxurious nightclub is sure to help you ring in the New Year on a high note. Check out the VIP area on the second floor with lofts seemingly suspended over the main dance floor.

Party to the beats of DJ Kahled this New Year’s and enjoy two hours of open bar and three hours of passed hor d’oeuvres with prime terrace firework viewing.

Then head over to TAO for the after party. Your LAVO ticket includes entry to Snoop Dogg’s Cabaret after midnight.

Set entirely in a 1920s theme, the entire three story venue will be filled with period-influenced entertainment to match the upscale-gentlemen dress code. Snoop Dogg will perform a special DJ Snoopadelic set in the nightclub upstairs as well as on the LED stage overlooking the entire venue.

Featuring two hours of open bar and three hours of passed hor d’oeuvres as well as a champagne toast at midnight, there’s no better way to ring in the New Year than with hip hop superstar, Drake at Marquee Nightclub.

XS Nightclub at Encore with ZEDD

DJ/producer, ZEDD who has worked with hottest music stars like Hayley Williams, Ariana Grande, and Foxes will be providing a high-energy dance party set to bring in the New Year at XS.

Enjoy open bar from 9pm to 11pm, champagne toast, and complimentary entry to The Sayers Club and Foxtail Nightclub after 12:30am on January 1st.

Bring in the New Year with the King of Crunk himself, Lil Jon, who will be headlining Surrender Nightclub’s biggest party of the year.

Partnering with Cirque du Soleil, Light Nightclub in Vegas is probably one of the best venues to see your favorite DJ with an incredible visual production to accompany some of the best beats. This year Alesso is hosting New Year’s at Light and you can bet that this will be a party you will never forget. 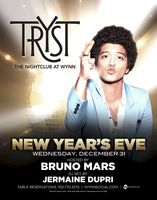 Tryst is bringing in the New Year with two special guests: DJ Jermaine Dupri and GRAMMY Award-winner, Bruno Mars. With this amount of energy you will be guaranteed a night of amazing entertainment to usher in the New Year. 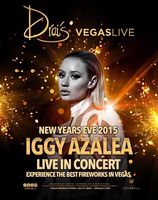 Contact Vegas Party VIP for VIP hosting party packages to make your New Year’s celebrations out of this world.